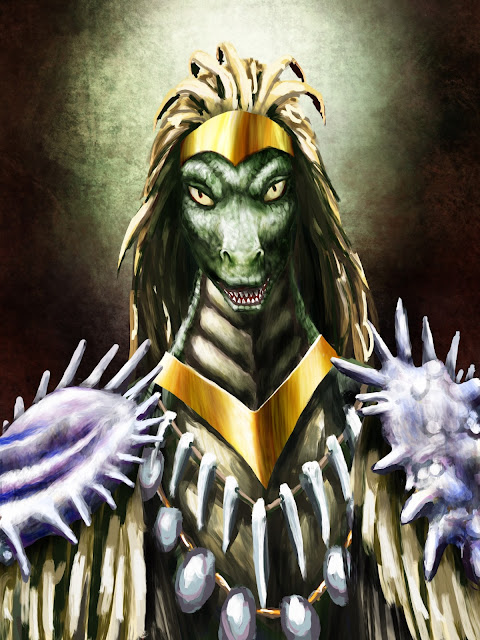 The closing ceremonies of the Inaugural Games of the Aquatic Alliance were a muted somber affair. The event had not had the effect that Princess Orthokent intended. She had hoped to strengthen her fragile alliance. However, due to the murder of the koalinth delegation by the quessari sea elves of the tribe of Manaan, she was instead forced to sever ties with her hopeful allies the quessari and had lost valuable military support from the fearsome koalinth. The remaining factions - the merfolk, locathah, bullywugs, and other lizardfolk tribes, had become uneasy.
In the weeks after the games the crew of the Sea Ghost had returned to their daily lives. Captain Baylore oversaw the completion of the repairs of the ruined abbey on Leper Island. Although it had dispensed with the pretense of being a monastery of cloistered monks of Procan it still served it long-time purpose - a place where smugglers and pirates could fence their stolen wares. In his spare time he completed his study of poisons and the use of a poisoner's kit.
Two months after the closing ceremonies Captain Baylore received a summons. The services of his crew had been requested by the newly appointed Baron of Saltmarsh - Anders Solmor.
The crew of the Sea Ghost sailed to the nearby town of Saltmarsh. When they arrived they were surprised to find a contingent of merfolk warriors and locathah hunters in the Kingfisher river. There were also several camps of lizardfolk outside of town representing various clans from the Hool Marsh and the Drowned Forest.
Inside the town council hall was gathered representatives from each of the factions plus several military generals from Seaton, Captain of the Saltmarsh town guard Eliander Fireborn, Duke Obertus Feldren, Baron Anders Solmor, Gil, spokesperson for the locathah, King Gulpa'Gor of the Bullywugs, King Lir of the Merfolk, King Kosj of the Marsh Water clan of lizardfolk, and his daughter Princess Orthokent - ruler of the Marsh Water clan.
Baron Solmor thanked them for coming. He told them that Princess Orthokent had gathered everyone together to make an announcement.
The room hushed as she stepped forward and began.
“The Sahuagin have made a critical error and the time for our attack has come.
The information brought to us by the bullywug spies pinpoint the exact date the sahuagin are planning a full scale invasion of the Azure sea.
We also know that the accommodations for their massing forces  are not yet operational. The sahuagin forces have not yet arrived  and the unfinished fortress is relatively unprotected.
But most importantly of all, we've learnt that the Empress of the Sahuagin herself is personally overseeing the final stages of the construction of her fortress."
She paused to speak the next words with appropriate gravity, "Many bullywugs died to bring us this information." 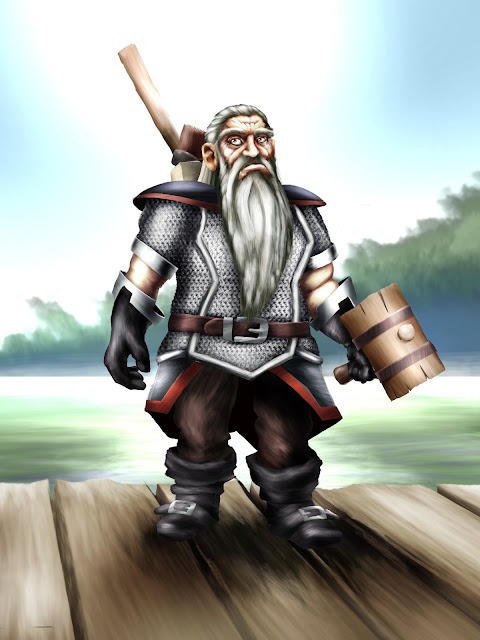 Craig was doing his best to say prayers of healing for his comrades but he was having difficulty defending himself against the multiple attackers.
Alot and Bordar waged a ferocious battle against their assailants - one of whom was larger than the others and clearly their leader. Eventually, one by one, they defeated their foes and were able to come to Craig's aid.
Seeing that the battle had turned, one of the heavy-set sahuagin fighting Craig at the entrance turned and fled, diving into the water.
Baylore quickly looked at the mechanism that raised the portcullis. It would take too long. He stepped out of sight and reappeared from a shadow outside the fortress. Baylore pulled the hood of his cloak over his head and the sides of the cloak flared out like a leathery manta ray.
The pirate captain dove into the water and sped like an aquatic dart towards the fleeing sahuagin.
The sahuagin turned to face his foe but a few quick strikes from Baylore were sufficient to render him unconscious.
Baylore emerged from the water carrying the unconscious sahuagin. The others were dragging the bodies into the outer guard room. Alot took his dagger and quickly dispatched any survivors by severing their spines at the neck.
The team closed the outer door and the portcullis and hoped no one would find the dead sahuagin within.
A Cautious Exploration
The team worked out a system for carefully exploring the complex.
First, they covered themselves with more magical dust of disappearance.
Second, Baylore would scout ahead. If the way was clear, he would slowly tap the wall and the others would join him. They would tap the wall indicating their presence. Then he would scout out the next section.
To their surprise, the complex was not the network of raw caves described by the lizard-folk. The passage was straight and smooth showing finished work by skilled workers.
As they explored to the left they found an empty room used as temporary storage. Digging and finishing tools were left propped up against the wall. 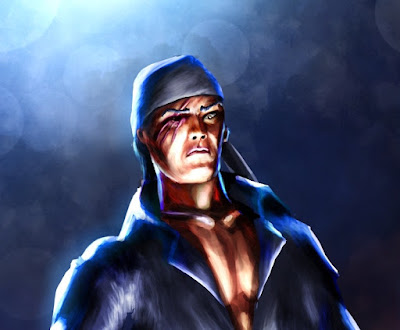 In the far distance Baylore could hear the faint sound metal tools ringing against stone indicating digging. He had difficulty placing from which direction it came.
The team took another corridor and found themselves in a large empty room supported by pillars. Several smaller cells were attached to the room. A passage led into an attached room filled with racks of hundreds of weapons - obviously meant for the coming attack.
Alot and Baylore struggled to think of some way they could sabotage or otherwise dispose of the weapons. Anything they could think of would be too noisy or take too long. They considered dumping them into the sea but they knew the aquatic sahuagin would simply recover them. Thus they reluctantly left the weapons for now.
DM Note-
By this time it was near midnight and they weren't getting close to a good action cliffhanger. So I called it a night. So, um, I guess-
To be Continued..
DM Note-
Okay, I want to talk about Room 4.

Dark green tiles cover the walls and floor of this room. Many lidless coffers rest against the walls, though there are none near the northern wall west of the archway. One of the coffers glows, its blue light filling the room.
A sledgehammer is propped against the northern wall.
Like most of the rooms on this level, this one has already been allocated to an eventual occupant (in this case, another champion currently quartered in area 60). The sledgehammer is one of the construction workers' tools.

What the heck is the glowing blue light that fills the room? I can't find anything else like it in the module. It bugged the shit out of me because I knew the players would want to know if it was important.
I wound up just saying it was a jar of bio-luminescent liquid which could be used as an underwater light source.
Posted by Christian Conkle at 10:29 PM