During a long company workshop yesterday, we used hexagonal sticky-notes to group our ideas. Seeing these little hex-shaped groupings immediately made me start thinking of board games and RPGs. So during the break, I ran and got my office dice bag and a handful of figures I keep in a small toy box under my desk (Yes, I have a toy box at work, completely unrelated to my work or my company, I can provide more info upon request) and sketched out a quick game on the fly.

Later that afternoon I wrote down my thoughts about the game rules and came up with a few other small improvements. Here's what I came up with! 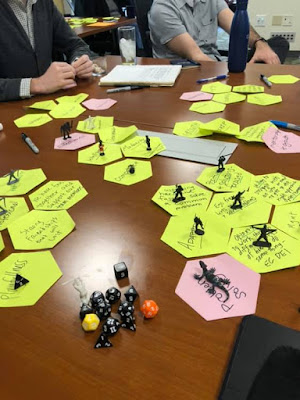 The Hex Master
The Hex Master populates each hex island with ninjas and boss monsters. A boss monster can only go on a pink hex. At least one hex must contain no ninjae or monster-lords. Ninjae roll 1d6 each for combat. Boss monsters roll higher dice - d8 for the first boss, d10 for the second, d12 for the third. 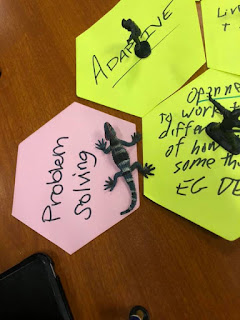 Pirates
Each player picks a pirate and chooses a class for their pirate. Only one pirate from each class is allowed in any pirate party.
A pirate starts at zero level and rolls a d4. You increase your level by +1 for each boss monster your pirate helps defeat. Each level +1 gives you +1 to your roll. You have 4 pirates in your pirate party.

Each pirate player picks an unoccupied hex on an hex island of their choice to start. It is wise to pick the island with the least ninjas. It is also wise for multiple pirates to pick the same hex and fight as one rather than spread out. 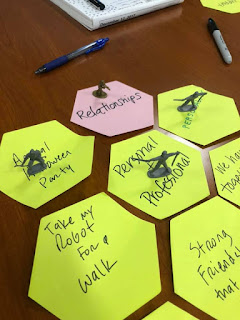 Movement
Players may move each pirate one hex. The Hex Master may move one ninja one hex.

Combat continues until either only pirates or only ninjae/boss monsters remain in the hex. 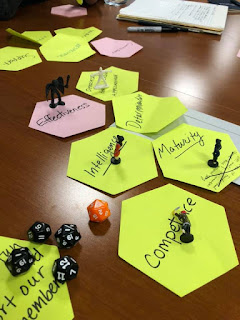 Level Up!
If the pirate party defeats a boss monster, they regain all their lost pirates. But only the pirates that survived the fight against the boss monster increase a level! Move to the next island and repeat until either all pirates are dead or all boss monsters are defeated.

Footnote
I just made these up as I went along. Improvise!

Posted by Christian Conkle at 9:33 AM No comments:


Friends of mine made a D&D live-play podcast, and it's great!

This podcast is a gem! The episodes are nice and short (about an hour each) which is much better than most 3+ hour gaming podcasts out there! Nate Shehorn's voice is a joy to listen to. Sandra Elliott, Mandy Stigant, and Julie Wnuk are fantastic role-players. They give each character a distinct personality. Their characters actually act like teenage girls. It's not your typical D&D party.

I would describe this story as Harry Potter meets the new She-Ra TV series by way of a YA novel series. There's teenage drama, there's house intrigue, there's lying and schemes and investigation and a hint of mystery.

I don't think I've ever encountered a D&D game with a girl's night sleepover (complete with makeover) followed by tense non-violent confrontation with bullies/rivals (possibly my favorite scene!). Kudos to Nate and the Best Friends Team for thinking on your feet (both players and DM) and turning what was probably supposed to be a combat encounter into something right out of a YA novel/movie.

Also, bravo on excellent editing! All the useless side banter and chatter is removed. I don't know how much of that is good editing and how much is attentive respectful and engaged players, but it's great!

Posted by Christian Conkle at 8:55 AM No comments: