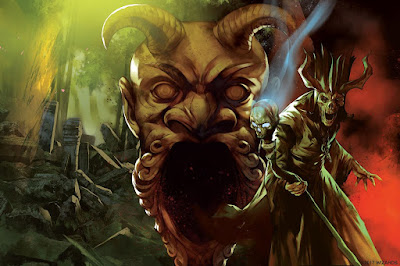 Starting next week, I will begin blogging about my new Tomb of Annihilation campaign!

Characters have been made but backstories are still being fleshed out. The adventure begins next week with everyone on a boat headed to Port Nyanzaru.

The setting is a homebrew world of my creation - Antara!

Antara is the wider world that includes Agartta, the location of one of my earlier D&D stories. Antara is a parallel world to our Earth, a place of mystery and legend where one may find Atlantis, Avalon, Shamballah, aliens, dinosaurs, and robot men. Antara is heavily inspired by hollow earth legends and Blavatskian Theosophy.

Characters are subject to change but so far we have:

Nova Scotia Blackman - a black Canadian archaeologist (Human Rogue) from 1920s Earth who was transported from Greenland to the strange continent of Zazamanc! He is searching for a way to return to Earth but has come to appreciate his new home. He is delivering a message to one of the merchant princes of Port Nyanzaru.

Apparently Jones - a demijin caravan guide and animal trainer (Air Genasi Ranger) from Akasa, the land of sky mountains. She is traveling to Port Nyanzaru to find work as an animal handler.

Bramble Wolf - a bestial theran barbarian (Razorclaw Shifter Druid) searching for members of his tribe that were captured as slaves.

Qhallebbewk Zriri - an aarokan aristocrat (Aarocockra Ranger) from the sky-city of Aarokar-Nasaris, banished by his noble family for his boorish behavior. He is travelling to Port Nyanzaru hoping to win the approval of his family by accumulating glory and fame.

Xoc Week - a b'alam warrior (Tabaxi Fighter) from the jungle realm of Bres, searching for the person or people responsible for the destruction of his tribe.

As you can see, I'm messing with the races a bit. I wanted to give the campaign world a more personal touch so I re-skinned all the races with new names and new cultural backgrounds. I wanted the setting to feel more original, more personal, than just inserting D&D races and names. It also allows my players and myself to be much more free in creating histories and personalities for their characters and their cultures. 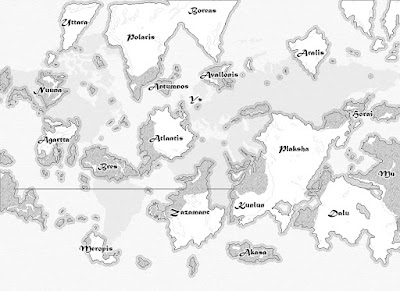 Likewise, the setting itself. I wanted the freedom to inject things like aliens, time-lost Nazis, and steampunk inventors, so I created what is basically a hollow world setting - but without the constant sun and actual hollow world. My world can be described as "Land of the Lost" meets "Gor" - without the slavery fetish.

More world information is forthcoming - but that info exists primarily to give the characters someplace from which to be. The real action will take place in Chult on the continent of Zazamanc!
Posted by Christian Conkle at 5:05 PM No comments: