You may have noticed a bit of a lull around here lately. I haven't been posting many updates since the end of Tomb of Annihilation. That's because I generally only post write-ups of campaigns I run as a Dungeon Master/Game Master and for the last few months my good friend has been running Coriolis for our group.

Coriolis concluded a few weeks ago and we're starting up a new game this Friday. I thought I would post a tentative schedule of upcoming games I'm planning to run so you have an idea of what to expect from this blog.

Deadlands
This Friday I'm starting a "palate-cleanser" mini-campaign of Deadlands. I wanted to run a short mini-campaign in the Western genre for the sole reason that I own a two boxes of Western-themed minis and want to use them.

I wanted to run something short with simple character generation and gameplay, so FGU's Wild West and the d20 games were ruled out. That left Boot Hill, Deadlands, and OSR variants.

I then polled my players to ask them what flavor of Western-themed RPG they preferred:

Their answers pointed to Deadlands.

So this Friday we'll be creating characters and running a session zero. Then we'll play a short adventure from the Marshall Law book for 2-3 weeks.

Ghosts of Saltmarsh
After that, we'll pivot back to D&D. I got plenty of feedback after Tomb of Annihilation that they enjoyed fighting pirates on the high seas and wanted to do more of that. Therefore, I'm going to run Ghosts of Saltmarsh as an intermittent campaign. 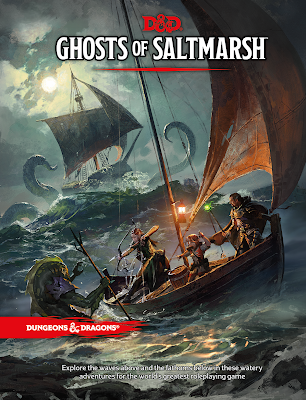 I'm going to play fast and loose with the "world building" this time. I'm not going to set the campaign in a "world". I'm just going to let the players do the world building as they see fit.

They can play anything they want and can switch characters in between adventures should they choose. I want them to be able to experiment and play different things. Other Games
One of my players has expressed an interest in running some other games, so these breaks present opportunities to try them out. He's interested in running Mutant Year Zero, Barbarians of Lemuria, and his own sea-faring D&D game.

In between, if we enjoyed Deadlands enough, we'll pivot back to that.

I'll endeavor to write up and illustrate summaries of each chapter I run as they happen. So look forward to an eclectic summer and fall here at Geekrampage!

Posted by Christian Conkle at 2:30 PM No comments: