Overlords of Dimension-25 got a good review!

Overlords of Dimension-25 got a good review over at RPG.Net!

Thanks David Crowe for the heads up!

Thanks Jeremy Buxman for the review.

Don't forget to check out the new Discord server.

Posted by Christian Conkle at 8:31 PM No comments: 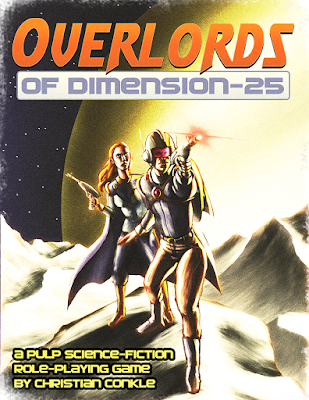 I created a Discord server for Overlords of Dimension-25 discussion.

Please join to ask to any questions about Overlords of Dimension-25, the City at the Edge of the Universe, or Buck Rogers XXVc.

Posted by Christian Conkle at 10:51 AM No comments:

The City at the Edge of the Universe 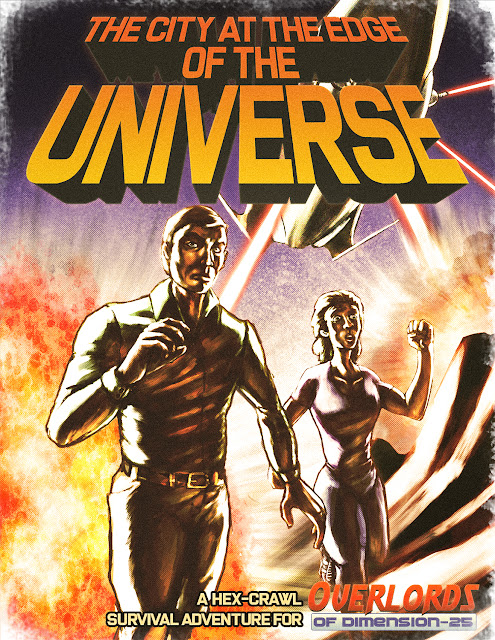 The City at the Edge of the Universe, the first campaign adventure for Overlords of Dimension-25, is live and on sale at DrivethruRPG.com for only $9.99!

On January 7, 2029, the Pennsylvania National Laboratory conducted the first of a series of groundbreaking high energy experiments. In a freak mishap the entire lab along with the nearby towns of Williamsburg and Buck’s Head were thrown out of their universe and hurled into the strange new world of Dimension-25.

Welcome to the City at the Edge of the Universe, an adventure scenario for the Overlords of Dimension-25 RPG.

This adventure is a “survival hex-crawl”. The information provided in this book is meant to present a situation to the players and a variety of destinations available for them to explore. Where they go and what they do is entirely up to them.

The “End” of this story determines the direction of the rest of the campaign. Will the player characters be heroes of the Earth Resistance? Will they become smugglers with the Trade Confederation? Will they turn to a life of organized crime and perform elaborate heists with the Solar Syndicate? The answers all depend on the choices the players make and the obstacles they overcome.

The City at the Edge of the Universe provides rules for creating characters from our modern world who are transported through a strange dimensional rift to the futuristic world of Dimension-25.

The City at the Edge of the Universe adds three new classes to Overlords of Dimension-25:

The City at the Edge of the Universe also adds modern weapons and equipment as well as vehicles - both modern and futuristic - and vehicle combat rules.

Posted by Christian Conkle at 11:27 AM No comments:

Changes to Overlords of Dimension-25

Changes to Overlords of Dimension-25

Yesterday I uploaded an update to Overlords of Dimension-25. I wanted to go over what changed. Most of these changes were the result of my recently running the City at the Edge of the Universe campaign and noticing places where I could clean up or improve the rules.

Optional Rule: Improvisational Invention
Gamemasters may wish to allow characters with the Jury Rig skill to improvise new inventions, innovations, or improvements as if the character had temporary access to the Gadgeteering skill. A character using Jury Rig can improvise only one device at a time. The Game Master should roll 1d20 any time the improvised device is used or put to the test. On a roll of 1, the device breaks, shorts, melts, or otherwise ceases to function.

A rocket pistol fires a self-propelled explosive projectile which accelerates towards its target like a miniature missile. Rocket pistols can fire unguided ammunition or radar-guided “smart” ammunition that locks onto a target and actively corrects its flight path to correct for any deviation (+2 to hit). Rocket pistols can also be loaded with specialty warheads such as chaff clouds which confuse smart ammunition radar sensors or aerosols which diminish the effectiveness of beam weapons like lasers, disruptors, and heat rays.

A plasma thrower is a heavy weapon connected to a backpack power source by a heavy cable. The thrower launches a spherical energy projectile which explodes and discharges superheated ionized plasma upon impact, burning and electrocuting anyone caught in the blast radius.

Optional Rule - Moving Away from a Opponent

If a character moves more than five feet away from an opponent, the opponent is allowed a free attack - or several attacks if the creature has multiple attacks per round - at the rear of the moving character. This attack is made at the moment the character flees and does not count against the attacker’s action for that round.

If, on their turn, a character moves their normal rate and performs no other action, they may move away from an opponent without provoking the free attack.

Whenever an attacker is firing a ranged weapon at a target that is engaged with one or more other combatants in melee combat, the attack has an equal probability of hitting the intended target or any one of the other opponents. The Game Master rolls randomly to determine which potential target is actually hit.

Added optional rule for taking careful aim. This one I made up for my campaign.

If an attacker with a ranged weapon does not move and spends the entire round taking careful aim at the target, they may make a special “practice” attack roll without actually firing. If the practice attack would have hit, they gain +2 to their actual ranged attack with that weapon in the subsequent round. If the attack is successful, the damage is doubled. Rogues may instead add +4 to their attack roll against that combatant and may triple or quadruple this damage at higher levels.

Re-wrote the rules for Grenades to make them more consistent with the rules from AD&D second edition. The original rules were a little too blunt.

Thrown explosives and hand grenades do not need to make direct contact with their intended target to damage them. Instead explosives are thrown at a stationary point on the ground. The effective Armor Class of the target zone depends on its distance from the thrower.
If the attack misses, the grenade or explosive missed the intended target zone and has rolled or bounced away from the target. The distance is determined by the Deviation result in the table below. Roll 1d4 and consult the table below to determine the direction.
Any creature within five feet of the center of the blast radius suffers the full effect, no saving throw is made. Any creature more than five feet away from the center but still within the blast radius may make a saving throw. On a successful saving throw the target suffers only half the effect. The target suffers the full effect on a failed saving throw.

As originally written, the pilot’s skill rating has little effect on the execution of space combat. Game Masters who wish to introduce additional opportunities for the rocket pilot to demonstrate their skill can require a Pilot Rocketship skill check for every hex facing changed. A successful skill check ignores the speed cost for the hex facing change. On a failed check, they pay the normal speed cost. The rocket must move forward a minimum of 1 hex after the skill check. 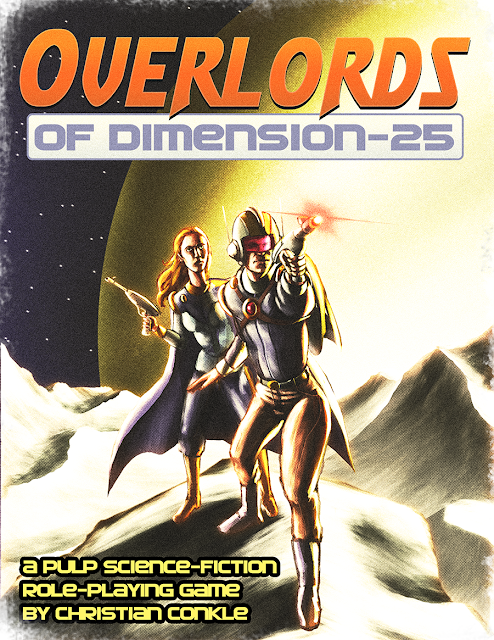 Posted by Christian Conkle at 9:38 AM No comments: