The Story of Patriarch Ul-Lon 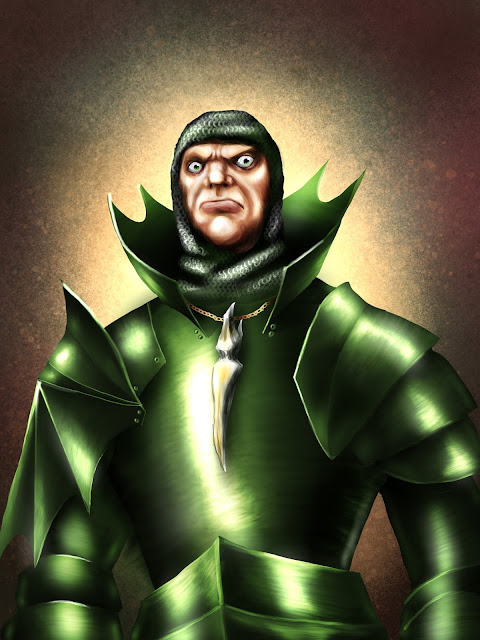 I was once a warrior-priest of Heironeous in Seaton. I was always fascinated by dragons and I was tasked with protecting an ancient book called Liber Draconis - the Book of Dragons. Although I was its sworn protector I was forbidden from ever reading the book.

One day I met and befriended a scholar named Mordrin and his friends Orgmond and Thalon. I soon became very good friends with Mordrin and his companions for they shared my fascination with and knowledge about dragons. Indeed, as scholars their knowledge far exceeded my own.

Mordrin knew all about the Liber Draconis. He told me that the book was filled not only with information about the different breeds of dragons, their capabilities and weaknesses, their cultures and customs, it revealed their true power! You see - he told me that dragons were in fact manifestations of godlike power! No, it is true!

Mordrin told me that the book could unlock secrets of power for those who study it.

Mordrin told me that the book could teach us to communicate with the spirits of dragons long dead, and that they could reveal even more secrets hidden within!

Mordrin said that the book contained prayers and rituals useful for invoking the powers of the dragon spirits through a living dragon that could act as a conduit. You see, Mordrin knew much about these draconic spirits. He and his companions were already well versed in the secret rituals to invoke the power of the dragons. He said that those who knew the secrets could one day become dragons themselves! He offered to teach me.

Mordrin’s offer intrigued me. I became obsessed with it. I wanted badly to become a dragon. Mordrin offered me an invitation but said I had to first pass an initiation. I had to steal the Liber Draconis.

Thus did I steal the book and abandon my holy vows! Mordrin said I had passed the first test on my path to invoking the power of the dragons.

Mordrin, Ogmond, Thalon, and I fled Seaton. We needed a living dragon to serve as our conduit to the spirits. Mordrin knew that the black dragon Aulicus had survived the war against Sakatha over a hundred years ago so we sought him out. Aulicus was old and injured. He could no longer fly and leaving his lair was difficult. But even in his elder infirmity he was a truly magnificent specimen!

The tribes of lizard-men who lived in the Drowned Forest worshiped him as a god, but theirs was a primitive totemic awe of a powerful being. They brought him offerings and sacrifices which kept him fed and happy. The lizard-men did not revere the dragon spirits the way we did.

We found Aulicus and were afraid he would consume our flesh as was his right. But he spared us. He saw in us useful supplicants - for we possessed the Liber Draconis. Aulicus wanted us to use a ritual within the book to transfer his soul into an unhatched dragon’s egg. He would be reborn! He made us an offer - he would spare our lives and act as our spiritual conduit if we could perform the ritual.

So it was that we moved into the ancient underground temple complex located beneath the lair of Aulicus. This was a year ago. I was tasked with procuring supplies for the ritual so I left our new home and traveled about, gathering what we needed. Along the way I acquired more books and more information. I even recruited several new members into our order.

When I returned Mordrin informed me of grave news. Mordrin, Orgmond, and Thalon now served a being known as Sakatha.

You see, the lair of Aulicus was located at the entrance to an ancient underground temple complex  built by a sophisticated culture of reptilians in ancient times - a kingdom from which modern lizard-folk are but primitive descendants.

Located far beneath this complex was a mausoleum containing the remains of Sakatha - a monument built by his slaves after his death over a hundred years ago.

Mordrin said that Sakatha was still alive and that he sought revenge against the descendants of those who defeated him. Sakatha wished to build an army and once again rule over the region as a king - not a leader of a tribe of lizard-folk, but as a true human king!

Mordrin said that I was to continue my work in reincarnating Aulicus. I would train and initiate my new recruits. We would study the Liber Draconis and perform rituals to the dragon spirits. We built a new shrine on a nearby island to offer burnt sacrifices to the dragon spirits.  I even managed to locate the unhatched egg of a black dragon. Unfortunately the smugglers who were to deliver it to me stole it.

Aulicus united the disparate tribes of lizard-folk who worshiped him and tasked them with retrieving the stolen egg - he called it his heir. Aulicus instructed his lizard-folk worshipers to follow the command of Sakatha as their new leader. Any tribal leader who resisted was overthrown or assassinated.

Meanwhile Mordrin began building an army for Aulicus. He hired mercenaries initially. He took the mercenaries down into the lower levels - the areas belonging to Sakatha - the areas from which I was forbidden to enter. The mercenaries returned with ashen complexions and glazed stares. They served Sakatha blindly. The mercenaries increased their ranks by raiding and capturing the bandits who dwelled within the Hool Marsh.  They too were converted into thralls of Sakatha. I never really got along with the mercenaries or the thralls. They lived in barracks near the entrance to the complex. Perhaps you encountered them?

Mordrin needed to equip his growing army so he began raiding the caravans and selling the stolen goods to the smugglers in Saltmarsh in exchange for weapons and armor.

Two months ago - during the height of the raids on the caravans - he learned that the Merchant Guild of Saltmarsh was planning on hiring someone to investigate the raids. I’m not sure how he learned this. I believe he has gained access to some method of scrying upon far away people or places. Mordrin took one of my acolytes and converted him into a thrall. He then armed the acolyte with a magical gemstone - a gemstone empowered with a prayer that would strike dragon-flame down upon the infidel. The acolyte was to take the gemstone and use it to destroy Anders Solmor - descendant of one of the villains who overthrew Sakatha.

The attempt to mete out draconic justice apparently failed. The merchant guild hired some vile assassins. Aulicus sent some of the lizard-men who served Sakatha to intercept these assassins at the Dreadwood River bridge. When that failed Mordrin assigned some thralls to misdirect them towards the hag Siren Diabla. Indeed any thrall captured by the enemy was instructed to do the same. That ploy likewise failed. The assassins were able to find a guide - a thrall from one of the local villages that managed to escape Mordrin’s “process” - and managed to gain entry into the lair of Aulicus.

Aulicus defeated them, of course, killing all but two. But great Aulicus was weary and he finally succumbed to death. Mordrin’s soldiers managed to capture the two survivors - the metal man and the half-elf sorceress. They were converted into thralls and allowed to return to Saltmarsh. There they would act as spies and provocateurs.

Eventually the caravans stopped so Mordrin turned to raiding the villages surrounding the Drowned Forest, taking prisoners and turning them too into thralls of Sakatha. He purchased magical armor and weapons for the captains and lieutenants of his small army from the devil woman in Saltmarsh. We have also used some of the prisoners as sacrifices to the dragon spirits. We have lost our physical conduit so only the offering of human souls will appease them now. We have also lost our control over the lizard-folk tribes of the Drowned Forest. Those still loyal to Sakatha were taken into the lower levels.

Thus far I and my acolytes have been spared from the secret process that creates the thralls. Indeed, Mordrin has forbidden me from delving deeper into the complex. Whether it is to protect me from Sakatha or to protect Mordrin’s power I do not know.

Posted by Christian Conkle at 1:32 PM

Email ThisBlogThis!Share to TwitterShare to FacebookShare to Pinterest
Labels: Patriarch Ul-Lon, Tomb of the Lizard King