The Savage Story of Lodar of Clan Long-Grass


The following was written by Jeff, Lodar's creator and player:


“Young Lodar is 14, ready to become a man. In the tradition of Clan Long-Grass, he is given the basic elements of wilderness survival…a knife, flint and steel, tinder, a heavy cloak, twine, a small pouch to put them all in, a skin for water, and 1 day of dried rations (think pemmican), and sent out to survive for 1 month with only the skills he has learned to help him survive. If he comes back, he is a man according to the ways of his tribe. He can marry, have children, carry on his name, become a great warrior or leader in the future.

If he comes back sooner, or has to be rescued, he is no better than a woman, relegated to gathering, cleaning, cooking, and other menial tasks. He may not marry, not allowed to have children, and is of the lowest rank in the clan.

If he is killed, then he was not strong enough, but died as men do and is given honor as such.

Lodar is a wild and rangy youth of the half-men. He studied hard to become a great warrior, like his father. He completed his trial easily, and returned to the village for the traditional fete and feast when a boy becomes a man…the clan chief’s daughter seemed to be *very* interested in all things related to Lodar. Maybe they could sneak off after the feast and what may be will be.

Except there is only charred remains of the village, the smell of smoke is fresh, and the butchered remains of the whole tribe are scattered. Among the dead half-men clan are a few corpses of…monsters. They look like Gnolls, (a territorial enemy but not a significant threat if precautions are taken), but these are swollen and huge. Twisted into giant caricatures with huge muscles, protruding fangs, those few that fell were covered in spears and arrows like hedgehogs.

Clearly, some evil magics were at play. Clearly, there is an evil tide rising, despoiling the land and the natural balance of things. Clearly, as the only survivor of Clan Long Grass, the only warrior with breath still to take, his way is clear.

Clearly, Lodar must avenge the fate of his clan."

And here is some more info about the "plainsfolk":

The half-men of the far north call themselves Chotadami, a name that translates to "Plainsfolk" or "Prairiefolk". The Chotadami hail from the Maidanalu plains in the northeastern Agartha, hundreds of leagues away from the Xanthus River valley. They dwell in burrows, like prairie dogs, but are nomadic, moving from warren to warren as they follow the herds of the musk oxen across the plains.

Chotadami know nothing of the Bantami, or "Hillfolk", their kinfolk in the Xanthus River Valley, or of the even more remote Pygmi, or "Junglefolk" of the Jungles of Xoth. 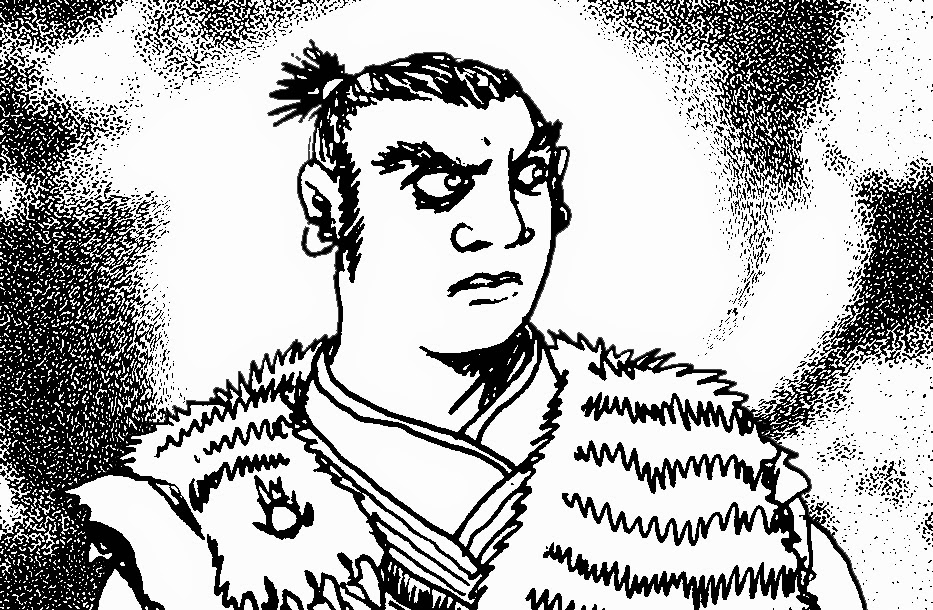 Posted by Christian Conkle at 8:53 AM